Most of you know by now that I left for China on Feb 27 and returned March 13. I traveled to Xi'an with Mark Chellis to bring home their miracle daughter Lily. The Chellis' were becoming tired of the wait as China adoptions have become long and drawn out. They spotted a little girl at Starfish and pursued her for a short time. Sadly, she is still waiting on paperwork but will hopefully be adoptable soon. After almost giving up, they found Lily listed with their agency and then found out she was also with Starfish. It is amazing to see how God works sometimes through relationships. They were able to be matched with Lily and even have video conferences so she knew "Baba" was coming. So the first amazing thing about this trip was the miracle of bringing Lily home.

The second amazing experience was the opportunity to stay at the Starfish foster home. Little did I know that I was about to be staying 9 nights in an apartment with 10 babies! I left RDU early Friday morning to connect in Newark for the direct flight to Beijing at noon. Mark and I arrive in Beijing around 3pm, change our Xi'an flights with China Eastern from 7pm to 5pm and arrive in Xi'an at 7pm Saturday evening. About 26 hours of airports and flying and we are finally at the starfish home and ready to go to bed. As we were getting on the elevator in the apartment building, we met the 5 nannies that were going home and the 2 night shift nannies were taking over at 8pm. We walk into the apartment and drop our bags in our rooms (3 bedrooms, so Mark and I each had our own room). Starfish had just taken 10 more babies the first of February - 9 cleft babies and one heart baby. I walk back into the the living room where 3 or 4 of the 8 babies in there were crying (two were in the back bedroom as they had been running fevers). I picked up a little baby and rocked him to sleep before laying him back in his crib. It was dark, so I didn't know if I had a boy or a girl and didn't know a name or anything. The next morning I go back to the same crib and I pick this little baby up again. The English name on his crib was "Bryan" and he was also number 8. Each baby has a number to help with bottles and other items that are personal to them. I picked Bryan up again and again over the next 9 days. Every time I came into the living room, there was Bryan. He was almost always content and wide eyed, looking right up at me. What could I do? I'm not sure how many times I fed him, but every time I walked in the room I heard the name "Bryan" amongst smiles and all the other Chinese words that the nannies were saying. The nannies knew I couldn't resist so I always ended up holding Bryan and his warm bottle.

Amanda de Lange runs the Starfish foster home. She was telling me the stories about the 50+ children she has cared for and how many times she is drawn to a child at the orphanage by their crying out in their crib. Many times in the orphanages the babies stop crying and it is unusual to hear a cry. I found it interesting that after such a long day and being so tired that I was drawn to Bryan by his crying. Less than 4 weeks earlier, he had been in the government orphanage and didn't even cry for the first few days at Starfish. He weighed 11 pounds at 8 months old when he came to Starfish. God has something special in store for Bryan. Heidi and I are talking about what God would have us do. Since I've been home, we've already had friends and family want to provide all the funds for Bryan's surgeries and also pay for us to adopt him. It is amazing how God uses people and relationships to change lives.

The third amazing part of this trip (sorry I use amazing so much, but I guess I have to since it was amazing) was the Guangzhou experience. Mark and I were ready to get home but we still had the US consulate appointment and other formalities to go through. We stayed at the White Swan with families from all over the US and had a good time on Shamian Island. If you haven't adopted from China then you may not know that this little island is where 90%+ of American families stay while finalizing the China portion of the adoption. All of the other countries have their consulates in Beijing but for some reason the USA still has theirs in Guangzhou, near Hong Kong. The amazing part of Guangzhou was not being at the White Swan or being on Shamian Island, but it was about Xing, a little girl from Fujian Province.

I have to go back a couple of years so you will understand. During the summer of 2007, our family went to Camp Nathanael in Emmalena, Kentucky to speak at "high school" camp as the missionary speakers. I grew up going to Camp Nathanael and worked summers there during high school and college. I had lost touch for about 15 years since moving away to North Carolina. Normally, they have guest missionary speakers from Brazil, Mexico or some foreign country and they do a great job speaking. They take offerings to raise support for their mission work. Our heart is for orphan care and adoption in China, but we lived in NC and didn't want to raise money for ourselves. But we did want these high school teenagers to understand the orphan situation in China. Heidi had this great idea that we raise money for a specific orphan in China and personalize this for the campers with a face and a name. We contacted Love Without Boundaries a few weeks ahead and they sent us information on Yu, a little girl that needed heart surgery and we needed to raise $2,500. Amazingly, the campers broke the record for high school week giving and gave $1,050. I always like to motivate with matching funds and we had found someone to do that so the kids would know their donation would be doubled. $2,100 was sent to LWB! I told the campers that they had probably saved a life and now this little girl had the chance to be adopted and that I would keep them updated. When LWB received the funds, I received an email back telling me that Yu was already covered and could they use the funds for another little girl. Yes, this is where Xing comes in. Here is a photos that came with the email from LWB about Xing, a 2 year old with a congenital heart defect (VSD). 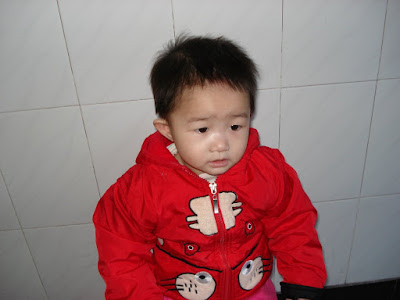 I forwarded this to camp and asked them to let the campers know. A few months later we received an email from our friend Sarah Ledford. She was raising money for a little girl, Xing, from LWB and her brother and sister-in-law from Winston-Salem, NC fell in love with this little girl. They wanted to pursue an adoption but weren't sure where to start. Sarah arranged for me to have dinner with them and Sarah and I tried to lower their expectations as we explained how difficult it is to pre-identify a child for adoption that probably wasn't even in the China adoption system yet.

Fast forward to March 12, 2009 and dinner at the Italian restaurant on Shamian Island, Guangzhou China with friends from Winston-Salem, NC that I met 2 years ago. They have a new addition! Below is Xing (Melyn Hales), now 4 years old, with one of her sisters and her new mom and dad, Beth and Terry Hales on the famous red couch at the White Swan. I think that's all I need to say about that. 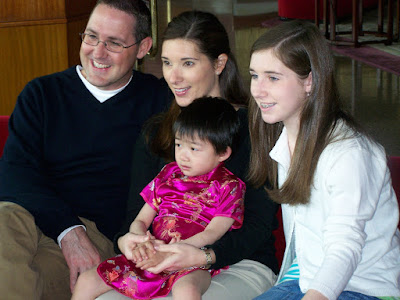 Posted by Dwain Gullion at 6:47 AM

Ahh, sweet Xing is home!! Such a wonderful story of Faith and Family. AMEN, I believe. I believe God orchestrated the entire journey to sweet Xing. I believe because our LWB daughter is asleep upstairs in her bed and our journey to her is one very similar to what you describe Xing's journey to her family to be. Only God can bring us our children and I am sure He is smiling!!

Thanks, Dwain, for giving our campers an opportunity to share in someone else's life. What a wonderful example of how the Body of Christ functions. Thanks, too, for the connection to Camp Nathanael and the ministry God has raised up in the Kentcuky mountains.

Hi Dwain,
What a blessing that you went on this trip with my hubby!! Thank you so much!! God does not make mistakes and he knew you were suppose to travel with Mark. What a wonderful journey He took you on while you were in China. We are praying for Bryan and his forever family :0)

WOW!! What an "amazing" story of your China experience! Thanks for sharing it with us!
Tell the family we said hello!